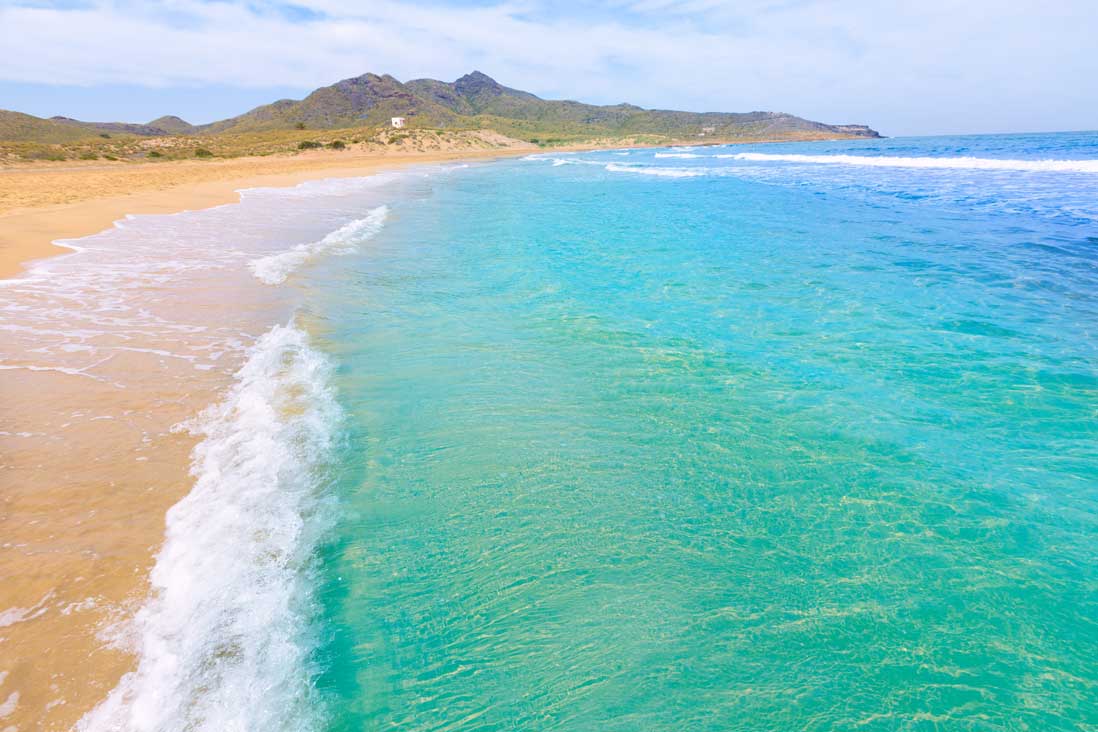 A long stretch of sand open to the winds of the West and segmented by several coves that fit like golden ellipses among the rocky blacks of the Murcian coastal mountains. A whole stretch of uncontaminated Mediterranean ecosystem , and just a few kilometers from the apartment towers of La Manga del Mar Menor. Golden white sands, dark cliffs and fossil dunes of great geological interest that are equally distributed along this coastal band near Cabo de Palos. Furthermore, the area is an important habitat for numerous birds, such as stilts, egrets, plovers, flamingos, achibebes and avocets.

In the middle of the Segura River is a region where the Arab imprint dominates everything: customs, history, cultivation techniques … Even the landscape , closer to the Middle East than to the European continent, it seems to drink from those remote Moorish days of the Kingdom of Murcia.

Next to the old road between Cieza and Archena, always next to the river, the terraces follow one another millimetrically furrowed by such infinity of paths and sidewalks that one must be born in Huerta to avoid getting lost in them. On one shore is Ulea , with its blue-colored houses and cool streets; opposite, Villanueva , crowded on a hill that dominates the valley; higher,Ojós , with its noble mansions and its Mudejar church; and a little further up, Ricote , the town that curiously gives its name to the valley, although it is the farthest from the riverbanks.

In Archena the river lies in ambush in a pleasant and refreshing riverside forest. There, the famous spa was built at the beginning of the century, heir to a culture of leisure around water started by the Romans and later improved by the Arabs.

Much of the Murcian coast, the one that runs from the border with Almería to Cabo de Palos, has a broken and mountainous profile , carved by blows of slate slabs and parched limestones whose escarpments end up dying in a sea that is almost always docile and transparent.

Between Puerto de Mazarrón and Águilas is where this tortured piece of coast reaches its highest levels of virginity . A territory not yet conquered that begins in the enchanted city of Bolnuevo , where the wind has shaped impossible shapes on yellowish blocks of sandstone .

Then comes Punta de Calnegre , an almost African landscape trapped in the same solitude that invades this entire Murcian coast.

There is only one way to cross Calnegre close to the sea line and it is entering a dirt track in an acceptable state of conservation that wriggles between alijares and stony boulevards that drain the surplus of storms on some beaches with round and blackish edges. A slow, tiring route for the vehicle, but very beautiful.

Cartagena already has little to do with the ghost of a post-industrial city that it was. The social and economic apathy have given way to a very interesting cultural offer, among which the Roman Theatre stands out, discovered almost miraculously when the former palace house of the Counts of Peralta was demolished.

A great scenic space that was forgotten under the old town of Cartagena: to return it to light, an entire neighbourhood of old houses had to disappear.

Impressive for its size and its constructive style, the Roman Theatre has become one of the cultural and monumental hubs from the city. Thanks to this pull, the city has started a tremendous entrance into the 21st century, putting in value all its historical-artistic heritage grouped under the brand “Cartagena, Puerto de Culturas”, a space in which to interpret and feel as interpreter of 2,500 years of history. Information.

The mines in the Sierra de La Unión still smell of carbide and nitrate, despite having been closed for decades. Its wealth was valued in the time of the Romans, who had 40,000 slaves there and mined 25,000 drachmas a day. The mining fever caused a spectacular resurgence of the region in the interwar years, to the point that the Union was known as New California . After those days of misery and hard work for some and quick enrichment for others, the mountains today offer some of the most beautiful arid landscapes in Murcia . Two paths allow you to cross it and appreciate the scene of pit holes, dumps and castles. Some is the dirt track that connects the Llano del Beal with the road from Los Belones to Portmán. The other, the paved road that runs between Portmán and Escombreras, circumventing some of the most spectacular open-pit mining . Both lead to the heart of a man-made Martian landscape.

Until the middle of the 20th century, Murcian social life ran, as in any good provincial city, around the Casino , built in 1847 in a neoclassical style . Today, after a long restoration, the Casino continues to be the most emblematic public building in the city. A neo-Nasrid courtyard built at the beginning of the 20th century by Manuel Castaños, inspired by the royal suites of the Granada Alambra, serves as a transition between the lobby and the central halls. The library maintains the same silent and ceremonial atmosphere as when it was inaugurated in 1916. The ladies’ touchIt is another superb nineteenth-century piece, decorated with allegorical frescoes of the night and the goddess Selene. But the noblest piece of the building is the Ballroom , with its 110-bulb chandelier and 620 different cut glass pieces that has been a privileged witness to the best social events in the city.

They call it the City of the Sun because in this corner of the Guadalentín valley, a key step in the communications between Levante and Andalusia, cloudless days abound. It is one of the monumental cities of Murcia, with a long and complex history. To emphasise the casino , eclectic memory of past times; its many ancestral mansions, such as Los Moreno, now converted into an Archaeological museum, or the Palacio de los Guevara , the best work of Murcian Baroque civil architecture. Where the wonder of Lorca has been best engraved is in the old stones of the Plaza de España. In 2011 a devastating earthquake structurally damaged much of the heritage of Lorca, affecting more than thirty buildings, churches and historical monuments . For its restoration, a Master Plan for the Recovery of the Cultural Heritage of the city was launched.

The description of the itinerary between Murcia and Almería that the Arab geographer Al Idrisi made in the 12th century already mentions the Aledo fortress , a town where life runs at a calm pace through narrow and cool alleys with Moorish tile houses looming. and whitewashed walls, pressed against each other, as if they were afraid of falling rolling down the cliffs on which the fortress and the town overlap. What has made Aledo famous is the La Calahorra tower , a fort built in the 11th century, one of the oldest in the region, which dominates the valley from a rock. Adjacent to the castle stands the church of Santa María, a baroque temple with two twin towers. Every January 6 the quiet streets of Aledo are overwhelmed by a tide of people who come to see their famous Auto de los Reyes Magos , an ancient liturgical drama played by the residents of the town.

9. The canyons of the Mar Menor.

In the natural beaches that unite the two seas , the Mar Menor and the Mediterranean, or as the Murcians call it, the Mar Mayor, an art of fishing known as cannon fishing has developed over time. It is a labyrinth of nets and rods that fishermen place in the middle of these channels to catch fish that come from the Mediterranean. The technique is still used today in the far end lanes of La Manga, the last free space of roads and apartment towers; a ZEPA environmental protection area where a company maintains this art of fishing, despite the fact that tourism has replaced artisanal trades of the area. One of the most popular catches is that of the Mar Menor mullet, a very tasty fish with which the famous Murcian cauldron is prepared. Dorada, magres, sea bass and chirretes are also fished.

Moratalla is the town that gives its name to the main mountain range of the Northwest . Along with Cehegín, it is the most charming town in Murcia. But here there are no great monuments or superlative buildings. The flavor of Moratalla lies in the minutiae, in that type of mountain towns with narrow and steep streets , retired people sunbathing in the town square, wine bars, carajillo and a game of dominoes, and the pleasant flavour that life leaves behind. by running at a calmly human pace . The added value of Moratalla is its natural environment. A classic weekend destination for thousands of Murcians, Moratalla has in its vicinity the only river in the region, apart from the Segura, which maintains surface flow throughout the year: the Alhárabe. About nine kilometers from Moratalla, the Alhárabe forms a series of pools and ridges known as La Puerta, one of the most pleasant natural areas in the entire province.

The base of Cabo de Palos forms a rosary of rock heads that rise from 50 meters to almost touch the surface to form one of the most generous marine life ecosystems on the Spanish coast , in addition to an immense cemetery of ships that throughout in history they have left their helmet on these treacherous rocky points. Protected under the figure of Marine Reserve , the basins of Enmedio, the Testa, Piles I and Piles II are refuge for almost all Mediterranean species: enormous groupers, corvinas, octopuses, moray eels, castanets, barracudas, scrapie and even sea eagles. More complicated is visiting the bass from Fuera, further from the coast. Known to the oldest of Cabo de Palos as the Roca del Vapor, because the most famous of the ships sunk in this submarine mountain range, the Sirius , an Italian passenger steamship that on August 2, 1906, when sailing to Brazil, nailed to him, causing a shipwreck in which 500 people died. His remains rest scattered on the slopes of the Bajo de Fuera along with that of another dozen long ships from all eras that also failed to see danger in time.

Espuña is a mirage of greenery in the parched lands of the southeast. This Regional Park, for which Murcians feel great affection, was the subject of a model reforestation project by Ricardo Codorniú, who managed to return the green cover that had disappeared due to excessive logging. A network of short-distance trails , marked with white and yellow markings, make it possible to cover it from end to end. Among the most recommended are the Fuente Alta trail, the La Santa and Aledo trails, and the Umbría del Bosque trail . Above we will find the famous Snow Wells, buildings that date back to the 16th century and were used to collect the first snows that filled these cylindrical cavities 12 meters deep and up to 14 meters in diameter. In summer, the ice was transported at night in cars to the cities.

Original article from El País, translated from Spanish to English.

Take a look inside one of Spain´s most expensive properties.

Rent with option to buy in Spain | Is it worth it?

6 Shocking Reasons Why Your Property Didn´t Sell in 2020

If your property hasn´t sold in 2020, chances are, one of these reasons is to blame! Number 3 is an eye-opener!
Continue reading
by Murcia Services

Tired of putting your plans on hold?  Then the wait is over! We are proud to offer all of our...
Continue reading
by Murcia Services 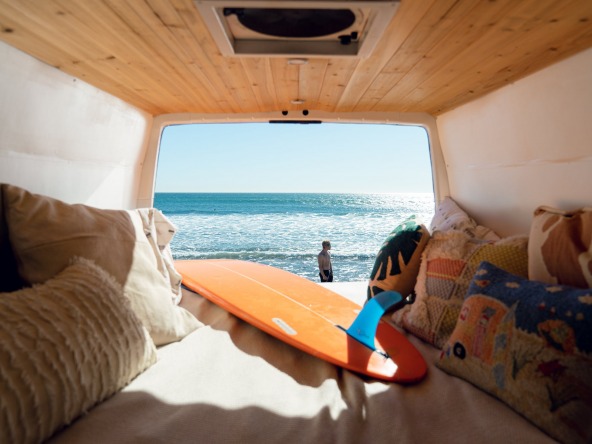 Living in Spain isn´t only for the retired. You can move to Spain in your 20s and still live a good life, as well as being able to learn a second language. Here´s our story.
Continue reading
by Murcia Services